Feast of St. Nicholas of Tolentino

Jesus said unto His disciples: Fear not, little flock, for it is your Father's good pleasure to give you the kingdom (St. Lk. 12.32). 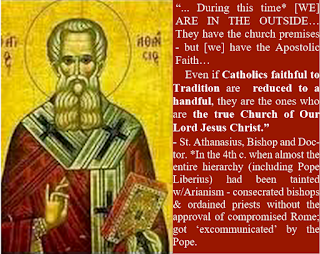 Many who bear the name "Catholic" think they are professed Catholics but only because they have an institutionally official connection - they go to their public "Catholic" buildings and obtain their certificates issued by the local 'presider' or avail of services of his gestures supposing blessings. Those "Catholic and Proud" often have the majestic Basilica of St. Peter for their cover picture. Unfortunately, this is how the Jews imagine and once the Apostles had thought of the kingdom of God on earth. This Catholic side of triumph and glory of the Lord of lords and King of kings (Apoc. 17.14) in His Church is only incidental (a  historical "accident" in Scholastic Philosophy which may come and go) but not the very essence.

Going beyond the mere physical sense of being "Catholic", we find another distinctive badge -  a devotee of the Blessed Virgin Mary: All [Catholic] generations shall call me blessed (St. Lk. 1.48). But, according to St. Louis de Montfort, there are true and false devotees among those who find that prophecy fulfilled in themselves. And there are only the few true devoted children of Mary who live according to the divine order of battle She left at Fatima, Portugal where we see realized the unfolding in history of a Scriptural revelation - not just a mere 'private' revelation, so say the pseudo-Catholic apologists of the "New 'Catholic' abNormal" since Vatican II revolution of 'lay empowerment' : the self-styled 'Defenders' but usurpers who are NOT ordained... in the things that appertain to God (Heb. 5.1) - the Apocalyptic Great Sign (Apoc. 12.1) appeared (from every 13th of May-October 1917) and another sign, the red dragon, appeared (the atheistic-materialist revolutionaries in November 1917). The dragon was angry against the Woman and went to make war with Her and THE REST of Her seed who obey the Commandments of God and have the testimony of Jesus Christ (Apoc. 12.17).

Three centuries before that the Apocalyptic Woman gave Her children the marching order for this our end-times battle at Fatima, She had already drawn the dividing line between the mainstream official Church marching under both the 'red' Materialist and the 'rainbow'-colored banners of the "Rights of Man" of Freemasonry and the little flock under Her's...