St. Roque - Patron of the Local Community of the Resistance Carmel of St. Joseph - Los Banos, PH (16th August 2020 | Commemoration of the 11th Sun after Pentecost). Tridentine Latin Mass (pre-1950 'Reform' - Missal according to the irrevocably "ex cathedra" decree "Quo primum" of Pope St. Pius V and the "Divino Afflatu" of Pope St. Pius X) - "the NORM [that is, the "ORDINARY" Rite throughout Western Christendom] in perpetuity" (Pope St. Pius V, ex cathedra decree "Quo primum") which is to be adhered to "absolutely" under pain of suffering "the wrath of God and of the Apostles Peter and Paul") celebrated by our true Catholic priests - conferred with the unchanging priesthood of Our Lord - by traditionally consecrated Bishops in the traditional Rite of Sacred Orders...

1) the 'novus ordo priests' whose 'presidency' conferred in the "New" Rite* is taken from the Lutheran ideal
---
* With "ineffective prayers" - Fr. Gabriel Amorth, Vatican's Chief Exorcist, on the "New Rite of Exorcism" even approved by a Pope revised, as with the "New Rite 'Sacraments'" (especially the Mass), to reflect the "New THEO..." ("Theo" in Greek: God") in its "New" prayers!
---

2) the 'Conservatives' who worship the all-mercy-and-compassion 'ecumenical [g]od' of the vulgar-'banquet-fellowship' - and, to be officially in 'union and loyalty' with the Pachapapa (Antipope Bergoglio), maintain that this is also 'Catholic' worship, even the "norm" (so-called 'Ordinary Form')... of 'Catholic' sanity and sanctity? - on the one hand; and, also offer 'TLM' to the "Catholic God" of our Apostolic Tradition: Who Is not only merciful but also just who knows how to chastise even to the depths of hell, on the other;

now, including the Society of St. Pius X or the SSPX who already formally "adhere[s]" in principle "to the ["New disOrder"] Rite of the Sacraments legitimately promulgated by Pope Paul VI and Pope John Paul II..." - SSPX official Bulletin: "Cor Unum" April 2012); and

3) Sedevacantists (pope-less 'Church' in defiance of the 'de fide' unanimous teaching of Church Fathers: the Church cannot be deprived of her visible head; and, the Pio-Benedictine Code of Canon Law: need for a superior tribunal to establish formal heresy - makes one "heretic" - and then only to deprive the "heretic" of ecclesiastical office). 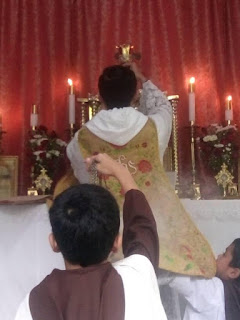 7:15am @ Our Lady of Mt. Carmel Chapel, Los Banos, Laguna (Order of the Blessed Virgin Mary of Mount Carmel - the Discalced Carmelites of Traditional Observance) 0965.006.7915

Women, please come in dress with neckline not falling more than an inch below your collar and the hem few inches below the knee; no tubes, no backless. Now the works of the flesh... immodesty.... they who do such [thing] shall not obtain the kingdom of God (Gal 5.19,21). Bring a veil or some cloth to cover your head: let her cover her head (1 Cor. 11.6).


"... During this time [we] are in the outside... They have the [church] premises - but [we] have the Apostolic Faith..." - St. Athanasius, Bishop and Doctor of the Church, who was wrongfully 'excommunicated' by a compromised Pope, Liberius, and who consecrated bishops and ordained priests against the official hierarchy the entirety of which was once almost infected with the heresy of Arianism

When therefore you shall see
the abomination of desolation...
standing in the Holy Place... FLEE to the mountains*....
Wheresoever the Body shall be,
there shall the eagles also be gathered together
(Mt. 24.15,16,28)

*"The true Catholic Mass in this our days is to be found then but rare and with great difficulty... outside our officially 'Catholic' walls"
- Rev. Fr. John, C.D.