+
Transfiguration of Our Lord Jesus Christ

Presbyter Joseph Pfeiffer, though leader of so-called 'SSPX-Resistance (SSPX-Marian Corps) - USA', yet gets himself mitred not by a bishop of the line of Abp. Lefebvre but by a mitred Sedevacantist [when the Presbyter is said to be not only non-Sedevacantist but outspokenly ANTI-Sedevacantist!!] whose mind is discolored also by the Feeneyite heresy (denial of Baptism of blood and of desire) - in desperation to salvage his 'seminary' whose men-in-black crowned with birettas, after having already completed 6 or 7 years of 'study', remain still as laymen in clerical trappings; falling out in precipitation by his attachment to his man-"wife" (Bp. Faure referring to P.JP's layman-in charge when he, also the self-appointed Rector of his KY-'seminary', was away) rather than obey Bp. Williamson, then the seminary's canonical head, on the point of seminary discipline. One does not window-shop & beg to get mitred but the [SPIRIT OF TRUTH] hath appointed... bishops to rule the church of God (Acts 20.28)... for obedience to the Faith (Rom. 1.5 - Sedevacantism, contradiction of the "de fide" unanimous teaching of the Church Fathers that the Church can not be deprived of her visible head, and Feeneyism are not of the Faith : all that is not of Faith is sin, Rom. 14.23). Even if the Presbyter might have had the 'luck' still of having been 'validly consecrated' at the least, he now runs though but LACKING THE DIVINE MANDATE. When the mitred Feeneyite-Sedevacantist Neal Webster was pronouncing the essential words of episcopal consecration over the Presbyter, the direct audio recording reveals "mysterii" (of mystery) instead of "ministerii" (of ministry) - it was repeated but still it is not distinctly "ministerii." He already got badly burned with the pseudo-bishop Ambrose Moran (giving credence to the man who offered him... TWO CERTIFICATES 'episcopal consecration') but he now has chosen to defy the divine sign; as consequence, God must have certainly witheld from him even a valid consecration and not just the legitimacy of it. Since the ceremony, he still considers himself SSPX-Resistance (SSPX-Marian Corps) and with a picture still of Abp. Lefebvre on the homepage of his so-called 'Pfeifferville' - truly faithful still to the position of the Archbishop??? You are of your father the devil... and he stood not in the truth... he is a liar: and the father thereof (Jn. 8.44).
"A Warning to Traditional Catholics Concerning False Shepherds"
(The Angelus June 1982) 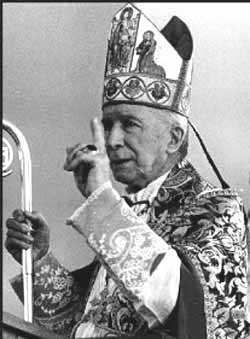 During his recent visit to America, Archbishop Marcel Lefebvre referred several times to the report that several individuals including some claiming to be "traditional" priests had attempted to have themselves consecrated bishops. Archbishop Lefebvre totally condemned their actions and warned all Catholics to have nothing to do with them. "They will bring ruination and scandal on the Church," Archbishop Lefebvre replied when asked his opinion of the scandal-ridden "consecrations." "It is a direct result of what happens when one loses faith in God and separates himself with Rome and the Holy Father," Archbishop Lefebvre stated, "and the enemies of the Church, including those who so strongly promote Modernism, will try to associate us and other good traditional Catholics with these (fanatics) in hopes of trying to bring discredit upon the good as well as the evil." Archbishop Lefebvre also stated that the actions of Ngo-Dinh-Thuc, the former Vietnamese Bishop who participated in the so-called "consecrations" [so-called Thuc-line mitred men-in-black, as the CMRI] are quite questionable in view of the fact that he is the same individual responsible for the Palmar de Troya fiasco which took place in Spain some years ago. A "visionary" of sorts, Clemente Dominguez de Gomez induced Thuc to ordain and consecrate him and then proceeded to proclaim himself pope. This group scandalized the world by conferring orders indiscriminately on anyone who presented themselves to "Pope" Gomez. The sect now claims hundreds of clerics, including large numbers of 14- and 16-year-old bishops and cardinals. Soon after the questionable ordinations, Bishop Ngo-Dinh-Thuc renounced his actions and published a letter saying that the "orders" he had conferred were null and void because he had withheld all intention of conveying orders to the Palmar de Troya sect. Given his past performances, there is no reason to believe that his present fiasco is any more credible. Referring to Ngo-Dinh-Thuc, Archbishop Lefebvre said, "He seems to have lost all reason." The proof of these individuals' bad intention is clearly evident in the fact that the new sect—which includes Father Moise Carmona and Father Adolfo Zamora of Mexico; Father Guerard des Lauriers, O.P., of France; and Father George Musey of America—have already conducted meetings with small groups of traditional Catholic priests and have announced their intention of calling their own "Council" and selecting one or more popes! Faithful Catholics are reminded that their faith prevents them from having any contact whatever with these schismatics and heretics, and that they are not permitted to support them in any way. All involved have incurred automatic excommunication, and all who support or affiliate themselves with them do likewise."
Amen, amen I say to you: He that entereth not by the door into the sheepfold, but climbeth up another way, the same is a thief and a robber... The thief cometh not, but for to steal, and to kill, and to destroy (Jn. 10.1,10)
Labels: Abp. Lefebvre Feeneyism Sedevacantism