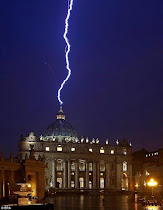 Canonical Anomaly in the Script of 'Resignation' Pope Benedict XVI Read (originally published, "Sagittam Electam - I", 24th June 2014 by "Ignis Dei")
Pope Benedict XVI is still the canonically visible head of the Church
It was ANOMALOUSLY declared: ".... libertate declaro me ministerio EPISCOPI ROMAE.... renuntiare..." That is, what was only renounced was a MINISTRY and not the OFFICE - even this, that of the Bishop of Rome which is limited, does not necessarily mean the OFFICE OF THE POPE which in turn is universal and supreme in jurisdiction (why, when the Pope speaks only in his capacity as Bishop of Rome, the condition of speaking with Papal Infallibility is denied) : as Pope, he becomes ALSO the Bishop of Rome --- 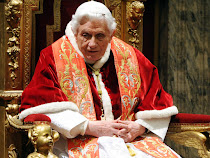 1) If the Bishopric of Rome was renounced, there would have been no need to state the renunciation of its ministry - common sense apprehends this.
2) Nay, the Pope cannot renounce the functions and all the effects of his office and yet imply that he still retains the right to the office - an absurdity only in the pseudo-Church of Vatican II over which the banner of Freemasonry proudly flutters: the Roman Pontiff, uncrowned with the tiara (being the Vicar of the Sovereign - all-encompassing absolutist - King of kings and Lord of lords), now reduced from an absolute Monarch to a ceremonial figure-head (of the State) with the Antipope - as the Prime Minister - executing the governmental powers!
3) Now, if it were the Office of the Pope that was truly renounced, everything else attached to it (as also being the Bishop of Rome and everything else attached to this...) follows!
That it did not concern the Office of the Pope is further proved by this statement: "... Ministerio Episcopi Romae... mihi per manus Cardinalium... COMMISSO..." The "ministry of the Bishop of Rome" was, in the "New" abNormal of Vatican II, a mandate to him by the scarlet colored beast (Apoc. 17.3): the 'Cardinals' a large majority of whom are, by their ring, 'Ecclesiastical Freemasons'; whereas, the Office of the Pope, though it is the Cardinals who elect to it the Successor of St. Peter, remains a divine right - the King of kings and Lord of lords confers to the elect the powers of the Office upon his free acceptance of the charge.
As to the purported reason for the 'resignation': ".... Vigor... in me modo tali minuitur...." - his appearance, concelebrating, at the post-Conciliar ceremony of 'exemplifying' Popes John XXIII and John Paul II to the 'liberalist' Protestantized Neo-Catholic 'world' belies an 'incapacitatingly' ("incapacitatem meam") 'deterioration of strength'. His last public address in his retirement place did not prove to be "the last time that he would be seen in public."
Pope Benedict XVI, in not willingly and freely renouncing formally the Office, remains, before the eyes of God, the visible head of Catholic Church. And Pachapapa Bergoglio ('Pontifex' Francis) after all this - Ecce! A charlatan indeed - an antipope...
The Antichrist and His Precursor, Antipope Francis - Men of Open Lawlessness
"Obeying all the Commandments... this paralyzes you, too... it doesn't allow you to go on forward" (RomeReports, 27th Jan 2017).