Jesus... wept over [His very own city]... For the days shall come upon thee and thy enemies shall... beat thee flat to the ground, and thy children who are in thee: and they shall not leave in thee a stone upon a stone: because thou hast not known the time of thy visitation (from the Holy Gospel, St. Lk. 19.41-47) 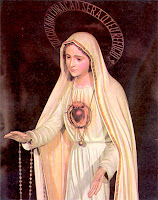 Since the CBCP 'consecration' of the country to the Immaculate Heart and the procession of 'consecrated bread' on the streets (with dramatic video presentation by the Society of St. Pius X-QC - also in public support of the 'consecration' - of their own "reparative" procession on foot and the official 'Order of Discalced Carmelites' publicly appealing to the 'Divine Mercy' on motorcade: their Brgy. Mariana registered even more 'cases') - news has it that, breaking the 100 thou mark and with 2000 dead among the close to 110M Filipinos, the country is on a 'losing battle' with the 'epidemic'; add to it the more frequent knocking off by earthquakes leveled-up in intensity; nothing of the miraculous turn-around in Portugal when the hierarchy consecrated their country to the Immaculate Heart in 1930... Indeed, their non-recognition of us, at the very least, is inconsequential and pathetically irrelevant - they themselves and their ministry, no mattter how perfectly 'traditional' it may get, are not recognized by God, nay, God has made a mockery of them and their works: for "I will be their God in truth and in justice" (Zach. 8.8), not even in exclusive (as w/SSPX) or 'extraordinary' mere-'#SenseOfTheSacred' 'solemn reverential' form-'TLM' ('Trad Latin Mass'). And so, "let us fear not the words of sinful m[e]n, for their [pretended] glory is dung" (I Mach. 2.62).

Unfortunately, MANY still would rather enchain [a notable coincidence of yesterday's reparative devotion to the Immaculate and the Feast of St. Peter in Chains] themselves with those "personis non gratis" as the Eternal Wisdom points it out time and again in today's Lesson - taking not the tragedy of those who ate and drink of spiritual food of Old for "[their] correction" (I Cor. 10.11): "But WITH MOST OF THEM God was not well pleased: ... overthrown in the desert" (v.5); THEY REFUSE TO GET CONVINCED as with the Jews in today's Gospel glorying in their seeming invincibility - being the official mainstream-Church/'traditionalists' - with their impressively massive institutions but the Lord un-impressed and weeping over their impending destruction: "She [the Catholic Church] will become small and will have to start more or less from the beginning. She will no longer be able to inhabit many of the edifices she built in prosperity" (Pope Benedict XVI, "Faith and the Future," Ignatius Press: 2009).
Labels: Catholic Resistance CBCP Pope Benedict XVI SSPX