St. Clare's monastery came under attack by Mohammedans (Moslems). She repelled the ENEMIES of the one true "#Katoliko God" [the Most Blessed Trinity] by holding the Most Blessed Sacrament [Our Divine Savior under the form of Consecrated Bread reserved in the tabernacle], contained of course in a ciborium - unlike the sacrilegious legend of Faustina <'#DivineMercy' hoax> : the Sacred Host jumping unto her UNCONSECRATED hands - against them. Has our "Catholic God" changed toward those enemies of Christ (the Divine Head and His inseparable body, the Catholic Church)? But for almost 50 years now of Vatican II 'ecumenical dialogue' with Islam, the Moslems have yet to burn the Koran in which our "Catholic God" is mocked and they have yet to kneel down before the 'consecrated bread' in the tabernacle when they get invited over to a parish church for 'ecumenical communion'. And so this divine sentence hangs STILL over their heads: "but [they] that believeth not shall be condemned" (St. Mk. 16.15). The change: "This saying is hard, and who can hear it?" (St. Jn. 6.61) - "From now on, the Church will not condemn" (Pope John XXIII laying down the foundation-principle of his Vatican II); the revolution - formula of apostasy declared by Vatican II ("Lumen Gentium," 16), see the declaration in "Our Catholic Mandate"; fruit of this revolution: "WOE to him that gainsayeth his maker, a sherd of the earthen pots: shall the clay say to him that fashioneth it: What art thou making, and thy work is without hands?" (Is. 45.9). Spare yourselves from the "woe;" but the path is "narrow and strait" - our Catholic Resistance #LabanKatoliko  : "We charge you, brethren, in the Name of Our Lord Jesus Christ: that you WITHDRAW YOURSELVES [not stay with - 'conservative' official 'TLM' groups - and not join, as with the Neo-SSPX] from [them] who walk disorderly , and not according to the Tradition which they have received of us" (II Thess. 3.6).

The calamities that fell upon God's chosen people of Old prefigured already those that will chastise the Church Militant for its necessary purification. Now all these things happened to them in figure... they are written for our correction (1 Cor. 10.11). Pope Leo XIII taught this in his Encyclical "Diuturnum illud" but with grave admonition: those chastisements are graver for us who have been raised to the dignity of a Christian (one who bears Christ in him; better, another Christ yet in its varying degrees of correspondence unto its perfection - beginners, the advanced, and the proficient or the more fervent) by grace merited at the prize of the Most Precious Blood of the Eternal Word-made Flesh.

As this day dawned but yet it was still dark, the light of the Eternal Word, in the lessons of the First Nocturn of the Office of Matins taken from I Kings 4.1-11 (DRV), gave us another glimpse of the mystery of God's purifying hand now laying heavily on the Church. The chosen people were getting desperate in the face of invasion by the Philistines. They fetched for the Ark of the Covenant - that mighty visible form of the presence of the God of Hosts in the midst of His chosen people of Old. But God delivered His people into the hands of the enemies and let the Ark even as their enemies' precious spoil! Why this tragedy? The High Priest, Heli, consented to the corruption of the people by condoning his erring priests in the mockery of the sacred. 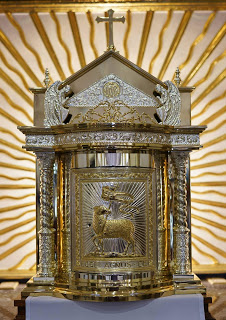 The 'mainstream official' Church still has the Real Presence in cases when a still validly ordained presbyter validly confects also the Blessed Sacrament. But from the preceding lesson, bringing about the Real Presence VALIDLY (with the proper intention and with the prescribed matter and form - the formula of Consecration over the matter - of the Sacrament) in their midst is not enough. There's still the crucial matter of bringing the Real Presence LICITLY : The priests who brought in the Ark were NOT PLEASING to God - they were far from the ideal of priestly ministry prescribed by God; so are 1) the 'presbyters' more so marked with a "new priesthood" : the 'presiders' of Paul VI (in his "General Instructions" of Apr 1969 on the "New 'Mass'") donned in Lutheran/Anglican 'liturgical' costumes and presiding over a 'table' at a remodeled sanctuary after the fashion of a Masonic Lodge to offer a "new rite of worship" [the "new rite of 'm(e)ss"" - the falsely claimed "Ordinary Form"] to the (g)od of their "NEW THEOlogy" (the 'ecumenical' idol professed by Vatican II in its "Lumen Gentium," 16 - see "Our Catholic Mandate"); and, 2) those compromised with the spirit of error : a) the so-called 'Extra-Ordinary Form' 'conservatives' of 'solemn-reverential-form-[mere]#SENSEofthesacred' official 'TLM' ('Traditional Latin Mass') - they maintain that the 'liberal Modernist Church' of Vatican II possessing the institutions of the Church is still the Catholic Church and its new Protestantized rite of worshipping its 'ecumenical' [g]od of 'all mercy & compassion' is indeed the norm (the 'Ordinary'... source of sanity and sanctity?); the b) Neo-SSPX (the Society of St. Pius X in compromise with the "New 'Catholic abNormal'" of Vatican II) who declared: "We also adhere to the [New]] Rite of Sacraments LEGITIMATELY promulgated [in the absence of factual canonical indication of it in the "Missale Romanum" of 1969!!] by Pope Paul VI and Pope John Paul II..." (Official Bulletin "Cor Unum," April 2012, signed by Bp. Fellay, then Superior General - formally unretracted or sorry over at the least); the c) Sedevacantists who stand in contradiction to the written Word Who prefigured of Old our present crisis: from the sole of the foot unto the top of the head, there is no soundness therein... the whole head is sick (Is. 1.6,5); and, d) the mitred head of False SSPX-Resistance in Kentucky: sworn anti-Sedevacantist (following the position of Abp. Lefebvre) who got mitred (the essential word ministerii of the formula of episcopal consecration bungled into mysterii) by a Sedevacantist discolored also by the Feeneyite heresy. To sum it up, even when the Consecration in this Vatican II-Church of the "Novus Ordo" (the "New World disorder") is still valid it will always remain illicit - unacceptable before the true God of Catholic Tradition; St. Thomas, in his "Summa" (de Sacramentis), teaches that even when the Sacraments of heretics and schismatics are validly conferred [also in the 'Black Mass' of Satanists] they are illicit, that is, non-grace-giving - the same for the apostates and the compromised* of the day | *Our Lord: In Me, [the father of lies] hath not anything (Jn. 14.30); the Sacraments in their hands do not confer grace - which comes from God appeased, not mocked and enraged! This we are sure of from the preceding lesson by the Eternal Word - the 'mainstream', despite the palpably concrete mighty Divine Presence in their midst, was held easy prey to the powerful enemies, figuratively: eager priority of being 'happy' 'in'-citizens of a "New World Order' where there are no absolute truth-holders (the 'pre-Vatican II Church' clerics) and where Christ the King does not insist on His absolute all-encompassing dominion both in socio-economic and private affairs; willing 'weak' preys to cravings and lusts of the flesh: 'I'm only human,' 'many commit the same,' 'it's natural urge anyways;' willing cohorts of the proud devil: who do not want to go any further in pressing the truth confronting them down to its logical conclusions or, having gone painfully through it even with only the first steps cry, 'no, I will not submit, it's too much!' See more what regard - if at all! - hath God toward the 'ecumenically'-disoriented PH hierarchs and even with the support of the Neo-SSPX with its daily 'reparative' Eucharistic procession on the streets of Brgy. Mariana in New Manila, QC : "The MAINSTREAM official Church is to be Overturned".

There are of course certain cases when souls - in invincible ignorance and of just dispositions - in the "Novus Ordo 'Church' still receive grace but not because of a "Novus Ordo" 'Sacrament' reverently conferred validly; the graces flow unto them from the "throne of grace" - from our traditional Apostolic altars. Yet, this mercy of God towards them does not stop there: iustum dedu[c]it Dominus per vias rectas (The Lord conducts the just man through the right ways, Wis. 10.10) - and so they are led out of the 'Novus Ordo', the Neo-SSPX, Sedevacantism, and Pfeifferism.

If we have sown unto you spiritual things, is it a great matter if we reap your carnal things? (I Cor. 9.11). Consider making a generous return on our ALMS page (via PayPal, GCash or BPI) for the light of salvation the God of truth (Ps. 30.6) has shed on you here.