Pachapapa Bergoglio on 'civil union'* for gays/homosexuals (RomeReports; CNA; CNS). In the original Spanish: "convivencia civil" (civil coexistence); but, a 'right' to family with legal protection? Diabolical trickery indeed! | *as before civil authorities - which union, however, is never considered marriage binding before God; rather, the sinful life of cohabitation in fornication accorded legal recognition and protection by Masonic Republics such as ours | - defies Eternal Judgment and his own Vatican II-UPDATED 'moral teaching'....

Against the lie that gays/homosexuals are "children of God" - "God created man to His Image: MALE and FEMALE He created them... and they were VERY GOOD" (Gen. 3.27,31). To say that one IS 'homosexual' or 'gay' - he IS standing in defiance of God in His eternal judgment : CHOOSING to invent for himself a 'third sex' for an excuse in not trying, BUT WITH THE HELP OF GRACE*, to speak, behave, and act as it belongs to a man or a woman (to put to death the old man sick with this kind of grave disorder). He is rather a child and servant of the devil - "You are of your father the devil, and the desires of your father you will do... He stood not in the truth; because truth is not in him. When he speaketh a lie, he speaketh of his own: for he is a liar, and the father thereof" (Jn. 8.44). *The tragedy of Vatican II-'liberal Modernist' disOrder ('Catholicism' in-sync with the "New World disOrder" - the "great harlot... clothed about with PURPLE AND SCARLET," Apoc. XVII ): "For my people have done two evils. They have forsaken Me [the Eternal Absolute Truth], the fountain of living water, and have digged to themselves cisterns, BROKEN #OrdinaryForm cisterns [the "New" rite of 'sacraments' & 'blessings'], that can hold NO WATER [St. Thomas Aquinas: ILLICIT: NO GRACE]" (Jer. 2.13).

#PachapapaBergoglio championing LGBT 'rights' is an #Antipope, that's why - see, canonical anomally behind the script of 'resignation' Pope Benedict XVI read. HE DEFIES ALSO VATICAN II in its UPDATED 'TEACHING' (pseudo-"Catechism of the Catholic Church" reinforced with attached document by the Congregation for the Doctrine of the Faith). Now who says again that we are bound by Vatican II-Church and that we cease being 'Catholic' in rejecting it?? 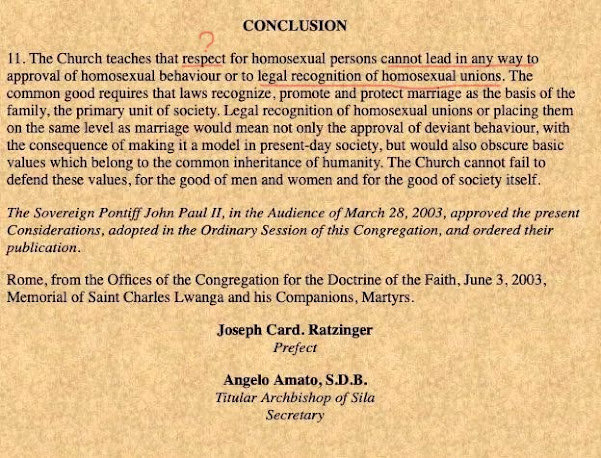