Devotion to the Immaculate Heart of Mary

Feast of the Immaculate Heart of the Blessed Virgin Mary 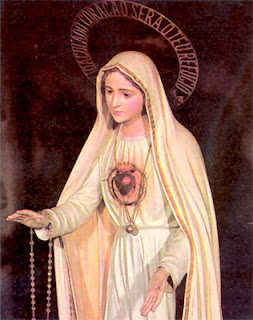 "Jesus... wants to establish in the world devotion to My Immaculate Heart. To whoever embraces this devotion I promise salvation: these souls shall be dear to God, as flowers placed by Me to adorn His throne. Do you suffer a great deal? Don't lose heart. I will never forsake you. My Immaculate Heart will be your refuge and the way that will lead you to God."
+ +
"Jesus wants to establish in the world devotion to My Immaculate Heart...," that is, as one of the last remedies* for the world: "God is giving two last remedies to the world. These are the Holy Rosary and Devotion to the Immaculate Heart of Mary. These are the last two** remedies, which signify that there will be no others***" (Sr. Lucia of the Immaculate Heart, C.D., in "The Whole Truth About Fatima," Vol. III, pp. 336-339, 710).
---
* This does not mean however that Our Blessed Mother is replacing the traditional Sacraments, most especially the Sacraments of Penance and the Holy Eucharist, instituted by Her Divine Son. "Traditional Sacraments", that is, the Sacraments administered according to the Traditional Rite and not according to the "useless" (cf., Fr. Gabriel Amorth, Chief Exorcist at the Vatican, on the New Rite of Exorcism, for example, even 'authorized' by the Pope)
** They are therefore in addition to the traditional Sacramental life of a truly devout Christian.
*** This denies the claim of the "Divine Mercy Devotion" and other new 'devotions' proliferating today such as the thousand "Hail Mary"s, and those being propagated by the cult of 'Maria Divine Mercy' (MDM: 'Mother of Salvation', "seal of the living [g]od") and by the cult of 'God the Father' movement.
---
"To whomever embraces this devotion I promise salvation..." This does not preclude even those who are the most miserable of sinners - those who are in the bondage of the devil through the vice of lust (impurity and homosexuality); they must, however, have recourse first to the traditional Sacrament of Penance where, at the Confessional, they will find grace with God: their sins washed away by the Most Sacred and Precious Blood of the Crucified; and, a traditionally ordained Priest of the Catholic Resistance (under Bp. Williamson) would examine the festering fatal wound of the disorder that is in them and so prescribe to them the most appropriate remedy God gives through the hands of Our Immaculate Mother and which the Church dispenses.
13th June 2012
Labels: Divine Mercy hoax Immaculate Heart of Mary