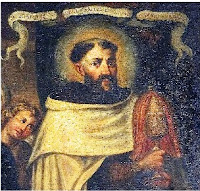 "In the sack of Leige by the enemies, sacrilegious men tore the pyx from the altar and impiously trampled the august Sacrament under foot. This blessed John could not endure; he boldly made his way into the church through dense crowds of furious men; and exposing his body to their weapons, he collected the Divine Bread, Which he carried to his monastery, where he placed it with utmost reverence" (Lectio VI, Matins).

Now since Vatican II 'change', we see Our Lord, contained wholly still, by concommittance, under the form of each Consecrated Bread PARTICLE falling, trampled under foot - granting possible Sacramental validity - in the officially 'Catholic' walls not by violence anymore but by non-Catholic communion in the hand and disregard of the traditional discipline for the priest to keep his forefingers and thumbs together after Consecration of the bread in the name of false obedience. Indeed the prophetic "burning zeal for [Our Lord's] honor" Blessed John had been "endowed" (Collect of the Mass) has already been extinguished in the official 'Order of Discalced Carmelites' (OCD) - they could not care lest they expose themselves to banishment and 'excommunication' by the 'bishop' : "But the hireling... is not the shepherd... and he hath no care" (Jn. 10.12,13). Beware of them, they TRULY "hath NO care."